This little tool has turned out to be the most intensive and time-consuming project, for a while, probably right after the Darwin FTW series.

3 years, 500+ hours in CAD, development & prototyping. 40+ prototypes have been made and tested for 60+ hours until the perfect solution was found.

Those who know me, also know that I don't like taking shortcuts and an easy way out..

The goal with the tools I'm offering has always been to create a perfect working solution, even if it takes way more effort & development than expected.

Hands down, footboard based trigger units are most likely the best, easiest, and most accurate system to trigger your "bass drum".. BUT they can be very picky to set up and to adjust, especially if you like to fine-tune your pedal setting or move between different kick drums and practice pads from time to time. Based on my email inbox and all requests I've received (people seem to enjoy telling me their hardware-related problems ;-)), it looks like that within the last years, several new products made it to the market. Unfortunately, most of them also brought new and "interesting" problems with them:


In-between the lines, it was clear that people where looking for solutions to address these problems. Being busy as I am with the Darwin series and other upgrades, I didn't find much time for intense development, but I started collecting some ideas and made some sketches.
The final input was given to me by Kevin Paradis, who recommended some sort of sliding tray for the sensor unit to be mounted on..

This was the final "nail in the coffin" of input and motivation. - After that, I lost myself in quite some hours designing, developing & prototyping.

The concept is pretty simple. By moving the trigger unit back and forward, the actual distance between the footboard and sensor can be adjusted. Adding a clicking wheel and some reference marks has opened up a hole new word of accessibility and accuracy.

The sensor also allows a full grown dynamic output range, if the sensitivity setting of your module has been set to a low rate (around 5-10 on a Roland TM2) - soft hits will turn out silent and hard hits will be louder, within the full dynamic range.

If you prefer a constant output, regardless of the velocity of your hits, just set the sensitivity higher (18-22 or higher on a TM2) and the full output range gets delivered with every hit.

The actual sensor used in all systems is a very thin and fine piece of electronic. It is able to pick up very fine mechanical impacts and converts them into an electrical signal which serves as the fundament for any drum module. As you can imagine, this little piece doesn't really like to be crushed and smashed, which is the reason, why some systems have a tendency to fail easily.

With some help from the ACD Artists, we did a lot of testing to figure out a solution that keeps the accuracy and sensitivity of the sensor but also protects it, no matter what. The combination of material, geometrical design, cable placement have lead to this final solution which has proven to be just reliable tool. If you're curious, I've put my setup recommendations at the very end of this site.

Treat the sensor well, and it will serve you a lifetime.
However, major accidents can happen and I like to be on the safe side. This is the main reason, why I've decided to make the whole sensor modular and replaceable - plug & play. This allows to swap out the sensor even in a "worst-case" situation:
On stage, in the dark, between songs - No readjustments necessary.

I've you made it to the very end of this little story, all that's left to say is:
If you're into the market for a bass drum trigger system, keep in mind, that there's an ACD option now as well! - If you have any questions or if there's anything else I can do for you, just let me know. 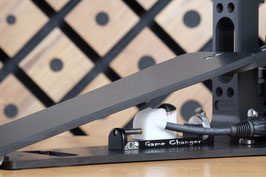 3 years, 500+ hours in CAD, development & prototyping. 40+ prototypes have been made and tested for 60+ hours until the perfect solution was found.

- fits Darwins and any other Pedal


IMPORTANT: Please read the setup instructions at the end of this page carefully, specially if you're struggling with crosstalk after Installation.

The trigger unit features machined M4 threads on the bottom and comes with M4 screws as well as adhesive strips .
Either use the screws to bolt the unit onto the base plate (there are matching holes on all Darwin FTWs), or use the included adhesive strips for a secure fit.
*a quick-release unit is in progress and will be available in early 2021 separately*

A an even surface of 80x20mm is required on the base plate for installing the trigger (adapter plates for uneven base plates are in progress)
Ideally you also have an even area of 80x20mm (or a straight edge) somewhere underneath your footboard to be able to use the full adjustment range of the sliding mechanism.
(similar to the base plate adapters, an adapter plate for covering uneven cutouts underneath the footboard is also in progress and will be available separately)

*Single Pedal* (XLR or 1/4"): A set of ONE trigger unit, ideally used with a single pedal. 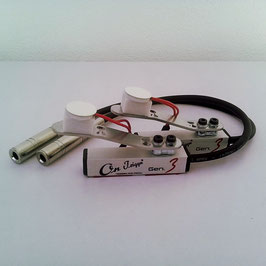 A great solution I still highly recommend, especially if you are on a budget.

- fits Darwins and any other Pedal 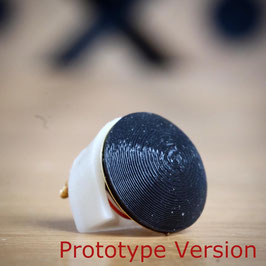 *PREORDER* - Production units are in progress and scheduled to be ready in late August, early September

Treat the sensor well, and it will serve you a lifetime.

However, major accidents can happen and I like to be on the safe side.

This is the main reason, why I've decided to make the whole sensor modular and replaceable - plug & play.

This allows to swap out the sensor even in a "worst case" situation:

On stage, in the dark, between songs - No readjustments necessary.

I've done most testing with Roland's TM2, but also various 2Box, DDrum, ATV and other modules have proven to work great.

In genreal and compared to footboard-based triggers, the Game Changer can handle a much more sensitive module setup without struggling with misfires or double triggering. Personally, I'm able to run the following settings on my TM2 & TD-17, which is the staring point I recommend:

Trigger: RT30-K
Type: Head & rim
Sensitivity: 10-24 (depending if dynamic range is wanted or not)
Threshold: 20-30 (some modules are picky and tend to pick up a ghost signal from vibrations, cables,..)*
RetrgCancel: 2-8 (keep it as low as possible)

* The Threshold setting is definitely the most interesting one, but let me explain;

The "struggle" with all footboard-based triggers is that module doesn't know about them and thinks that the sensor sits inside a cozy drum shell, protected from the environment.

It also thinks that the sensor is only exposed to very slight hits transferred through a foam piece. In order to react appropriately, the module is very very sensitive when it comes to picking up any mechanical impact and tiniest movements or vibrations that might influence the sensor. (- *you can even "trigger the module by touching the bare jack with your fingers when it's not plugged into the trigger*)

In our case, the situation is different and we need to "trick" the module a little bit. The sensor is rather exposed to the environment and able to pick up any little disturbance and crosstalk. To compensate for that, it can be necessary to "cool down" the sensor and to set the Threshold setting very high. Don't be afraid to move it up, its only purpose is to set the minimum force necessary to pick up a signal from the sensor.

Unlike other options on the market, the Game Changer's sensor unit is also in a very special way and able to pick up the tiniest strokes from the footboard, even if the threshold has been set to max.

In my tests the XLR connection tends to be less sensitive to crosstalk (offering a more solid connection) than the 1/4" version. Both are working fine, but on average, the 1/4" version needs a higher Threshold setting.


All other settings remain standard

Positioning the Sensor:
If you are comfortable with your pedal settings, press gently into the pedal until the beater lightly touches the drum head. Hold it and place the Game Changer underneath the footboard and let its sensor barely touch the footboard. - This is your ideal starting point. From there, start playing hits with your average lowest velocity while increase the distance (by moving the adjusting wheel in the "minus" direction). When the point has been reached where not all hits being tracked by the module anymore, go a few clicks back.  This is your ideal mechanical setting where all soft and hard hits being tracked.

Misfire or double triggering hasn't been problematic with Game Changers in general.
Please keep in mind that "less is more" - There's no reason for letting the footboard hit the sensor way before the beater has made its way to the drum head. A setup like this won't cause any damage (due to how the sensor has been placed and protected in its housing) but you won't experience the full potential of your setup.